This post is a response to a writing challenge from The Daily Post. The instruction was to write a story of exactly fifty words. It is called “a fifty.” I began to think of memories and scenes in my head that would lend themselves to this economy of words, a succinct picture in words. As I am new at the art of blogging, I am at times stifled and worried that I do not have “enough”  of interest to write, or “enough” talent and creativity. But that is not so…

This story is a true story. We met a beggar boy, no older than 5 years, on the streets of Lima Peru where we took our children on a family vacation. We called it a “vacation with a purpose.”  As a family, we worked in an orphanage, each of us with our own job to carry out. My children ate and played with the orphans at Kids Alive. They saw first-hand the effects of poverty on a child. These discarded children had nothing but lice, scabies and whatever bits of trash they could hoard before arriving at Kids Alive. And yet…they were full of life, joy and gratitude since they had been rescued from the trash heaps and brought to the orphanage. There they were given 2 outfits of clothing, a school uniform and supplies, 3 meals a day, medical care, a bed and a roof over their heads. To them, it was pure luxury and they were living in paradise! Enough is clearly a matter of perspective and experience.

The purpose of this trip was to teach our children to be grateful for what they have and to realize how much of the world does not know the excess in which we live as Americans. We wanted them to learn the joy of sharing what they have with others. It was important to us that they learn to treat all people with dignity and respect, since we are all the same. And we wanted them to value the right things in life: family, friendships, generosity, hard work,  service to others, and gratitude. I dare say the lessons were learned and my children were forever changed by this two-week trip to one of the poorest countries in the world.

“Enough is as good as  a feast”~Mary Poppins

And now for my first “fifty”:

The ragged street urchin sang, playing his broken ukulele. He held out his grubby hand. I gave him an apple and thanked him for his performance. His eyes lit up in gratitude for it was enough to satisfy him until the next wave of hunger pangs. How much is enough? 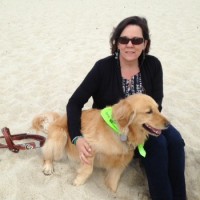 a transformed view of life with vision loss

Taking the myths out of blindness, the mystery out of dog guides, and the magic out of Braille.

Jalapeños in the Oatmeal

The Art and Craft of Blogging

Have the BEST morning EVERY morning

Journey with Maribel, your guide in the world unseen

Poetry and Short Essays by Visually Impaired and Blind Writers